Here are some reviews:

Bolt From The Blue is the second instalment of the Oblivion on Tour Series.Our thought on this instalment?
Explosive, raunchy, sexy as sin, hot. A brilliant read.Meet Nikki. Guitarist to Oblivion. Hot, sexy as hell. A womaniser, a player. Like all sexy rock stars, Nikki is the ultimate rock band sex god. Music is his life, his boys are his life. And the women, a never ending stream of offers that Nikki is all willing to take up on. Loves the single life.But Nikki and his ways are about to change. Why you ask?Meet Trixie. A business owner with a flair to party. She’s strong, independent, loves life. She’s a pocket rocket. Loves the single life, no attachments is her thing.But Trixie and her no –relationship status is all about to change. Why you ask?Because a chance meeting at a bar, Nikki and Trixie’s worlds collide.The chemistry is there?The desire is there?The want and need is there?But can anything become of Nikki and Trixie?Can Trixie open her heart again after being crushed in the past?Can Nikki change his womanising ways?Can they find a way?Add to that a crazy stalker, a guarded heart, a death, groupies and a European tour in the wings, you have one explosive read. It’s emotional, it’s hot, and it’s sexy as hell. It’s raw. And the sex scenes……DAMN HOT.We absolutely loved Bolt From The Blue from beginning to end. We simply couldn't put it down until the very end. We fell in love with Nikki and Trixie. We loved every word on every page. We loved their story.So if sexy as sin rock gods is your thing, then we highly recommend Bolt From The Blue to be placed on everyone’s TBR list. You will not be disappointed. A definite 5 star read.

Oblivion are back !!
This is the second book in the Oblivion on tour series and it’s guitarist Nikki’s turn at love.Nikki is your typical rock god, he’s into hot one night stands, groupies and he’s a recovering drug addict.

Then one night in a bar he his introduced to his lead singers’ girlfriends room mate and his life changes.

Nightclub owner Trixie is guarded in love after being hurt in the past and she’s only looking for a one night stand, this is the story of what happens when once is not enough.When a turn of events leave Nikki devastate he turns to Trixie but can these two overcome all the obstacle and find their happy ever after.

I loved the first book in this series but this goes one better.The two main characters are so likable you find yourself cheering from them from page one. The story has it all heartbreak, angst, and fear : the sex is off the scale and you will never look at a motorbike the same way again !

If you like your rock stars broken and dirty this is an automatic one click for you.
Posted by Unknown at 12:10 PM No comments:

Another Excerpt from Bolt From The Blue ... 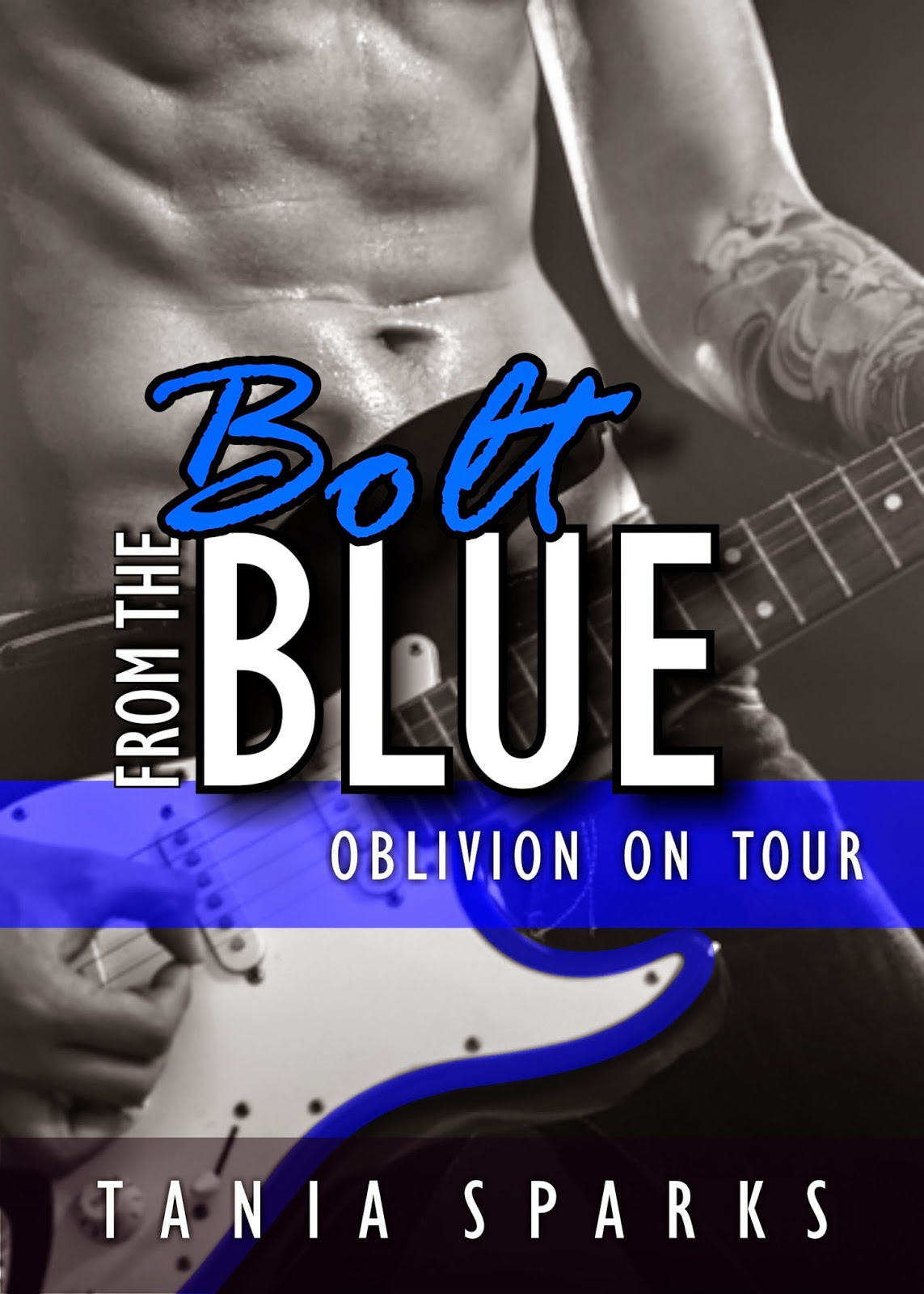 After about half an hour the excitement has started to quieten down and it’s just a noisy party atmosphere. Eve has deserted me and now has Ash wrapped around her. I notice that Ash is pretty adept at shaking off the attention from flirty groupies. His attention is solely on Eve, it’s quite sweet actually. Nikki on the other hand is thriving on all the attention. Admittedly he’s not partaking in anything intimate, but he’s definitely flirting and enjoying the interest he’s getting from numerous scantily clad girls.

Fuck this, I need a distraction. I glance around the room and my eyes meet with a sexy looking rocker that I don’t recognize. He raises his eyebrows at me and nods his head indicating for me to go over to him. I put on my sexy smile and saunter over. If Nikki’s allowed to flirt, then I am too! As I get closer to him he takes a few steps towards me and quickly secures his hands around my waist as he rumbles, “Well hello there beautiful, my name’s Matt, what’s yours?”
“My name’s Trixie.” I purr coyly.

“Mmmm” he hums. His eyes slowly rake over me suggestively. This guy’s a bit full on, but at least it’s distracting me from whatever it is that Nikki’s doing. We flirt playfully for a couple of minutes until I suddenly feel strong hands secure around my waist from behind and I get spun around to face a very ticked off looking Nikki. “This one’s mine!” he growls angrily.

Nikki snarls at poor Matt who’s looking slightly panicked as he pleads, “Shit sorry Nikki, I didn’t know she was with you.” Nikki suddenly picks me up and throws me over his shoulder as he barks, “Well she is, so stay the fuck away from her Matt.”

Nikki stomps across the room with me slung over his shoulder while I giggle profusely. He opens a side door, steps inside and slams it shut behind us, locking it securely. We’re in a small bathroom. He lowers me down to the ground, his eyes burn into mine. I’m laughing so much at his ridiculous caveman routine that I can barely remain standing. It’s only after a little while that I realize he’s completely serious as he snarls, “What the fuck were you doing Trixie?”

“What do you mean, what was I doing?” I chuckle playfully.

“Why the hell were you all over Matt?”

He must be kidding. What a hypocrite! “We were just talking! Besides I wasn’t doing anything you weren’t doing!”

“Bullshit. It’s not your job. Ash manages to cope without cavorting with every groupie that throws themselves at him.”

“Ash’s god-damned pussy whipped!” he exclaims as if that’s a genuinely logical answer. “Besides, I don’t see Eve falling all over guys from other bands.”

I put my hands on my hips and poke out my tongue. I stomp my foot insolently. “If you can, I can!” I shriek childishly.

Nikki starts to chuckle which quickly turns into a rolling laugh.

It’s now him that’s laughing, and me being serious. I get the distinct feeling that he’s laughing at me not with me. I straighten my face, “What’s so fucking funny?”

He has a massive smug grin on his face. “You get jealous as shit don’t you Trix?”

After a few more smug chuckles Nikki grabs me around the waist. “You know, when I saw you flirting with Matt, I felt so fucking angry. I was so jealous I thought I’d turn green. I had to try really hard to control myself. I almost went over there and smashed the shit out of him for even looking at you. Then when I saw his hands on your sexy body and you giggling and flirting with him, shit Trix…I swear, I almost lost it.”

I look at him seriously as I simply state, “I didn’t think it would bother you if I flirted, you seemed rather preoccupied.”

“God, how can it not bother me? You’re the hottest girl here and I’m not the only one that can’t take my eyes off you.” His body crushes into mine as he pushes me up against the door. He stares forcefully into my eyes, “We had a deal Trix, when we’re in the same town, there’s no fucking around. Look, I know I probably shouldn’t have let those groupies touch and flirt with me. But in my defense, it’s like breakin’ a fucking lifetime habit. I didn’t even think. I promise I wasn’t going to do any more than talk to them. I’ll do my best from now on. When you’re around, you’re the only girl I want touchin’ me and telling me about all the dirty things you plan to do to me.”

“Holy crap Nikki, do they really tell you all the dirty things they want to do to you?”

Nikki just shrugs his shoulders with a big grin on his face as if it’s the most ordinary thing in the world. “Anyway, you’re the only one I want to do dirty things to me. So hows about it?”

I raise my eyebrows, “Hows about what?” I repeat, batting my eyelids at him.

“Hows about we get dirty…here in this bathroom.”

Before I get a chance to answer, his mouth crashes into mine and his hands grasp my ass as he pushes me harder against the locked door. He picks me up and we spin around as he positions me on top of the vanity. His hands are everywhere and they move so quickly my top and bra are removed and discarded in less than a few seconds. His fingers are deftly unzipping my jeans and they’re being tugged down my legs along with my panties as he groans, “There that’s better, I like you naked.”

Posted by Unknown at 5:40 PM No comments: