I have some news - I've finished Pure Torture! It's been checked by my editor, passed through the hands of my beta readers and is now practically ready to release! ***squeals excitedly***

Cody’s the sexy drummer extraordinaire of the hard rock band Oblivion.
Kitty’s the little sister of one of Cody’s band mates and she’s had a secret crush on him for years.
When the band are back home for a few days, the chemistry between them is both unexpected and undeniably off-the-charts.
She quickly realizes that the prospect of having what she’s always fantasized about is a very real possibility.
He quickly realizes that although he feels this mind-blowing attraction towards her, she’s the little sister of one of his band mates - he would get his ass kicked from here to hell if he ever laid a finger on her!
But can Kitty convince him? After all, no one else needs to know, a one-time hook-up might suit both of them…or could it ruin everything? 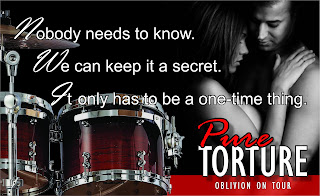