Feel Like Makin' Love ... Extract from Bolt From The Blue

The lights go out and the crowd all start to cheer and whistle in anticipation of Oblivion arriving on stage. The low hum of a guitar starts to resonate around the stadium. The sound is hypnotic and ghostly, especially with the lights all turned off so it’s pitch black. The crowd has gone silent. I can hear the mutterings of some vocals, all five of the guys are chanting some sort of ancient psalm. Suddenly the stage detonates in an explosion of noise and light. The heavy thrashing of the guitars and frantic beat of the drums engulfs me as the music pulsates through my body. Cody is frenziedly hammering his drums as the other four stand at the front of the stage, guitars in hand, bent at the waist, thrashing their heads rhythmically.

They’re amazing! Me and Eve dance and sing along animatedly as they work their way through their playlist. About half way through their set, in the middle of one of their older songs Nikki breaks into a guitar solo. The lights dim around the other band members and a red spotlight focusses solely on him. He’s standing, legs spread, head tilted back, eyes closed as he makes his guitar wail sensually. Unexpectedly the wailing stops and the stadium goes silent. Has something gone wrong with the sound? I look over to Eve who shrugs her shoulders. The rest of the band look a bit confused.


I look back to Nikki who has a big grin on his face. He starts playing again as he strums a well-known guitar riff and it echoes through the stadium.

The rest of the guys are all laughing at him and shaking their heads at Nikki’s impromptu  outburst. The crowd think it’s hilarious and the girls are all screaming as if it’s a personal invitation! He continues the guitar riff and strides up to the side of the stage. He points at me, then to his chest, then back to me again as he silently mouths, “You. Me. Later.” He blows me a kiss. Then his guitar returns back to its normal thrashing rhythm as he strides across the stage and the band join in with the rest of their song.

I’m just standing there with a big grin on my face. Eve nudges me in the ribs as she yells “Just a hook-up huh!”

I can’t help myself, this boy only needs to look at me with those burning brown eyes and I’m done for. I grin back at her, not responding to what we both know is an ever increasing but scary-as-hell reality. 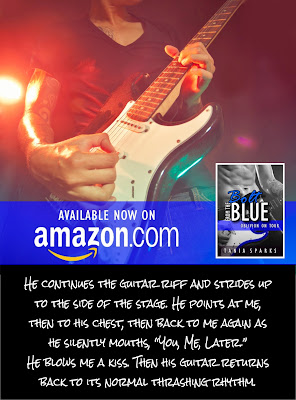